Our State’s Noticeable Absence in the Prison Strike

From August 21stto September 19th, and beyond in some cases, prisoners in correctional facilities across the country took part in a prison strike to protest egregious conditions and unfair pay. [1] Considering the notorious lack of access to modes of communication in prisons, the decentralized but still united movement was an especially impressive feat. However, Pennsylvanian facilities were notably absent from the strike. Why did the state with the highest incarceration rate in the Northeast [2] not participate? We sought to find out. 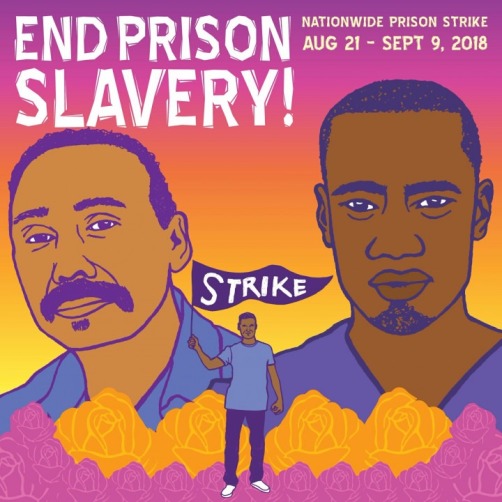 A Quick Overview of the 2018 Prison Strike:

The recent prison strike that took place a few weeks ago was neither unfounded nor unforeseeable. Years of harsh prison conditions and systematic injustice served as powerful catalyzing tools for the strike. One especially egregious event was the prison riot that took place at Lee Correctional Institution in South Carolina just months prior. In April of 2018, seven men died and more were injured after a riot broke out that last for seven hours. [3] According to people on the inside, the riot was the result of a gang fight initiated by staff who placed rival members in the same housing and who implemented especially harsh punishments which instigated even more tension. [3] In addition, over the summer California prisoners were fighting wildfires for only $1 per hour and $2 per day. [1] These instances compounded the existent institutional problems in the criminal justice system, and prisoners and advocates responded with a strike. [3]

The strike was planned to begin on August 21st and end on September 9th, to involve incarcerated individuals spanning across seventeen states, and had a clear list of ten demands. [3] Some of the demands, which were released by a South Carolina jailhouse lawyers group, include: improvements to prison conditions, an “end to prison slavery” (i.e. incarcerated individuals being paid unfair wages), an end to racial disparities in sentencing, an end to gang enhancement laws, an end to felony disenfranchisement and more. [4] Outside advocates such as Jailhouse Lawyers Speak (JLS) were integral to the organization of the strike. [5]

As noted earlier, Pennsylvania stands out for its incarceration rate. According to the ACLU, Pennsylvania has the highest number and rate of parole supervision in the country, holds the 3rd largest population of people under some form of carceral control (i.e. parole/probation), and African Americans are 8.9 times more likely to be incarcerated than whites while Latinos are 3.3% more likely. [6] According to a 2017 analysis by the Prison Policy Initiative, jobs in state-owned prisons on average pay incarcerated individuals hourly wages between $0.33 and $1.41. [7] In Pennsylvania, that average is $0.19 to $0.42. [7] The study further contextualizes these numbers by pointing out that saving up for a phone card worth $10 would take a Pennsylvanian inmate almost two weeks. [7] Thus, incarcerated Pennsylvanians were not lacking a cause for strike. So, that brings us back to our initial question: why were Pennsylvania prisons absent when it came time for the nation-wide strike?

[image provided by the NonProfit Quarterly]

As previously stated, Pennsylvanian prisons were not at the forefront of this past historic prison strike. Instead, states like South Carolina have been most audible about actions taken behind their prison walls during the 20 day strike period. Despite reports documenting the beginning of the strike in Philadelphia, there is no evidence that this momentum was carried through to the actual strike. There are currently no reports of action taken in Pennsylvania prisons that correspond with the national protest. We propose a few potential answers to the question:

The timing of the strike coincided with two major changes in Pennsylvania Department of Corrections (DOC) policy that severely constrained individuals’ ability to communicate with the outside world. Firstly, an outbreak of a mysterious illness in late August caused the Pennsylvania DOC to institute a complete shutdown of all state facilities. [8] This included the suspension of all visits and closure of all mailrooms to any non-legal mail. [8] Additionally, all mail to Pennsylvania inmates is now being handled by staff in an effort to stop drug smuggling. [9] These policies were first implemented in late August and may have inhibited the modes of communication necessary to implement and sustain a strike.

The Marshall Project set out to substantiate the initially-reported numbers of the prison strike and found some interesting information. Although initial reports claimed participation from seventeen states, officials from states thought to be involved such as South Carolina and Florida claimed that there had not been work-stoppages. [5] Activist Amani Sawari, who assisted the Jailhouse Lawyers Speak organization with strike efforts, suggested that it is possible that prisoners were striking in more covert ways, such as boycotting the prison commissary. [5] So, it is possible that prisoners in Pennsylvania facilities participated in the strike in ways that prison officials could not easily observe or report on.

Finally, the nature of a prison strike involves countless opportunities for misinformation. The scarce resources that prisoners have to communicate with the outside world can seriously inhibit an outside advocate or reporter from getting correct and up-to-date information. Furthermore, it is important to remember the incentives of all actors involved. Perhaps institution officials sometimes purposefully underplay the strikes that go on under their watch to appear more capable and in charge. In this way, it is possible that Pennsylvanian inmates did in fact strike in some manner and we just do not know about it.

All in all, the 2018 prison strike took place in response to the many ills that plague the criminal justice system. Incarcerated individuals took a stand against the exploitative prison conditions and labor practices they endure on a daily basis and did what they could to enact change. The lack of reports on Pennsylvania prisons’ involvement does not necessarily mean that inmates in the state did not participate. It is worthy to note that communication from inside prisons to the public is extremely limited. The ability of inmates to report on the prison conditions while there were mail restrictions and correctional officers who may not have wanted the information to get out makes the entire situation unclear. In addition to that, it is extremely difficult for incarcerated individuals to communicate with one another from different facilities. This means the specific dates of the strike may not have been followed by every prison just as every prison carried out the strike in different ways. For those that we know did in fact participate, it is difficult to tell if their protests brought about the change they seeked in their original ten demands. Although this entire process will be clearer to analyze with time, what can be said is that the incarcerated population is demanding to be heard and we are listening.

[2] The Facts About Mass Incarceration in Pennsylvania. ACLU Pennsylvania. https://www.aclupa.org/our-work/current-campaigns/smart-justice-pa