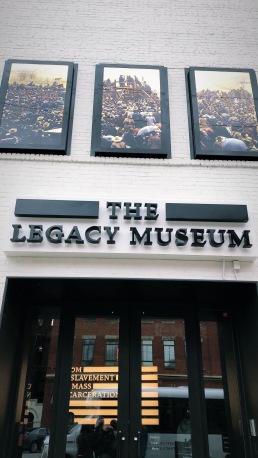 A museum built in the center of a city that was the biggest contributor to the domestic slave trade. A museum designed to educate, to commemorate, and to contextualize. The first thing you see upon entering The Legacy Museum, a Bryan Stevenson project, is an exposed brick wall that reads “You are standing where enslaved people were warehoused.” With that sentence, you immediately feel their presence and their pain, and as you progress, you begin to learn their stories. This museum is narrative; it goes beyond just showing that racially oppressive systems exist by providing personal stories to illustrate them. The Legacy Museum exists to depict the evolution of the institution of slavery, beginning with the 12 million people who were kidnapped from their homes in Africa and ending with the injustice that is mass incarceration.

What sets this museum apart from others is that Stevenson incorporates first-hand narratives through the use of innovative technologies. Towards the beginning of the experience, the visitor is presented with a room filled with six barred cages. Each cage holds a hologram or multiple holograms of enslaved Africans. Activated by movement near the bars, each hologram tells their own story. They move, their voices are emotional, and, most importantly, their stories are true. In one cell, a young boy stands barefoot, in ratty clothes, clutching the hand of his little sister. “Mama? Is that you? Where are you?” he repeats over and over. This cage is obviously depicting the horror of family separation during the slave trade. However, what made these holograms powerful was that they were able to successfully transform events typically analyzed in an academic, distant setting and present them in a way that directly transplants one into the slave era. In this way, Stevenson humanizes these stories for the first time. Had I learned that enslaved families were often separated at auctions? Yes, of course. But to hear this boy cry out for his mother, while simultaneously trying to protect his little sister, through physical bars, is an experience that you do not get from any history textbook.

The next exhibit presents a huge, blown-up timeline. We are taken through the end of slavery to the terrorizing acts of lynching, to segregation, and finally to mass incarceration, where a central theme is emphasized: the presumption of guilt and dangerousness that is assigned to Black men and women. “Our history of racial inequality has created conscious and unconscious bias that has resulted in racial discrimination against people of color by law enforcement and the criminal justice system.” – Hank Willis Thomas, Raise Up (2016).  Not only was Montgomery, Alabama a hub for the domestic slave trade, but it is also currently one of the harshest sentencing states. In fact, last year Alabama, with a population of 4.5 million, imposed more new death sentences than Texas, a state with a population of 24 million people.

Similar to the slavery part of the exhibit, the horrors of mass incarceration were presented through multiple mediums. One wall depicted photocopied letters written by incarcerated individuals, most of whom were on death row, to Bryan Stevenson himself asking for help with their cases. Of the most surprising to me was P.N.’s letter. P.N, as she was referred to for privacy reasons, was 17 years old when she was sent to East Baton Rouge Parish Prison. In her first night there she was gang raped by four men. After this incident, she was denied access to a doctor because the warden claimed that she had deserved what they had done to her. As a direct result of feeling betrayed by the institution, she threw hot water at one of her attackers. She was then put into solitary confinement, where a deputy beat her further. P.N. was still denied medical care after this incident. She was 17 when this happened. She is now 50 years old and still serving her life sentence in that same prison. Another letter that was particularly striking and illustrative of racist and unfair sentencing practices was B.M’s story. B.M. was sentenced to 3rd degree burglary for stealing a bike off of a neighborhood porch. As a man with no priors who had been accused of burglary before but never arrested or convicted, B.M. felt this decision was unfair and moved for an appeal. However, the appellate court decided that his crime should actually be defined as 1st degree burglary, a crime with a sentence of life. B.M. is currently serving a life sentence for stealing a bike off of a porch.

Stevenson’s Legacy Museum is an incredible, very emotional, way to learn about the institution of slavery and how it evolved into Jim Crow and the process of intentional racial separation. These systems are able to persist through an inherit and obvious acceptance of difference and “othering” that has been ingrained into the American psyche. This labeling has allowed us to systematically treat Black people as inhuman and inferior. The most recent of these manifestations is the system of mass incarceration. We must work to dismantle these notions and to continue to appraise mass incarceration and harsh sentencing for what it really is: a system of modern slavery.

3 thoughts on “Bryan Stevenson’s Legacy Museum: A Story of Oppression”